For an English version, please move your mouse over each word of the menu. So, a new submenu will appear below.
The History of the Biewer Terrier 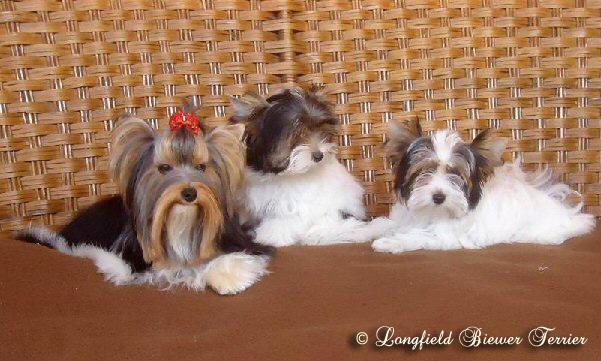 Indiana Jimmy, Loretta & Lalique
.
The Biewer Terrier is quickly working its way into the hearts of Americans everywhere. With its lighthearted, whimsical; child like attitude, this tri-colored toy terrier is gaining popularity with dog lovers everywhere. Equally as good with children as he is with other dogs of all sizes, the Biewer Terrier is a loyal and fast friend to all he considers part of his family. Although every dog has his own unique and special personality, as a breed, the Biewer Terrier is confident, happy, fun loving and even tempered. Generally speaking, Biewers are not noisy or especially difficult in any particular way.

With the introduction of the Biewer to America in 2003, there has been much speculation about its heritage. Mr. and Mrs. Biewer had been raising and showing Yorkies for 20 years, when on January 20th, 1984 the first blue, white and gold Biewer named Schneeflocken von Friedheck was born. This was the start of what is known as the Biewer Terrier Breed.

Mr. Biewer spent 5 years selectively breeding his dogs until he was able to establish and breed true to a standard uniquely the Biewer Breed. The dogs were then registered as Biewer Yorkshire Terrier a la Pom Pon with ACH. In 1989 when Mr. Biewer signed the standard for this wonderful new breed, it was that of the Yorkshire Terrier with the coloring being White-Blue-Gold. Mr. Biewer was not a man of many words, so the standard was short and brief. 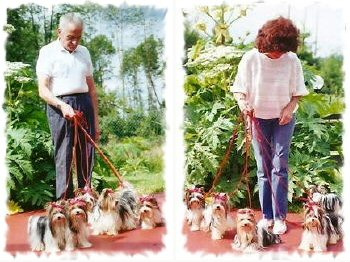 Mr. Werner Biewer  and Mrs. Gertrude Biewer The founders of the Biewer Terrier breed
Mr. and Mrs. Biewer kept a close reign on the Biewer breeding programs in Germany, so their quality breeding dogs were hard to come by and quite costly. When Mr. Biewer became ill, he was not able to carry on the dream that he and his wife had set out to accomplish for the Biewer Breed. All the decisions of their breeding program became the sole responsibility of Mrs. Biewer and the care of her husband and the dogs became to much. She slowly phased out their breeding program in order to better care for her husband.

The BTCA, Inc. contacted the Mars Veterinary in Feb of 2007 to see if they could help them with the genetic make up of the Biewer Terrier. It wasn’t until later in the year that they released the tests and we began submitting blood samples. After testing over 30 different lineages (100 plus dogs) to date, we have been able to show that the Biewer Terrier is a distinct of its own. Oct. 5th, 2009 the geneticist working with the BTCA, Inc. released the news that they had developed a breed signature for the purebred Biewer Terrier. Click to see Breeds Detected

In Nov. of 2007 Mrs. Biewer agreed to a meeting with representatives of the Biewer Terrier Club of America, Inc. at which time she shared important information about the early development of the breed, and the trials and errors they had gone through to reach their goal. The BTCA shared what they were doing since the arrival of the Biewers in America and the trials and tribulations they were going through. Mrs. Biewer is in full support of what the BTCA is doing for the breed and became a club member in order to help with the development of the breed in America. We are in constant contact with her, keeping her abreast the advancements of the breed and have developed a close friendship through it all.

ARBA, American Rare Breed Association, has accepted the Biewer Terrier as a rare breed and the BTCA, Inc. as the National breed club for the Biewer Terrier in America. We will be showing with ARBA under the standard that they have accepted for our breed and will also exhibit with the IABCA International shows.

We are proud to be taking an active part in the development of this remarkable new breed, the Biewer Terrier and we welcome everybody to become involved in this exciting part of the its history. Our long-term goal is to take the proper steps to gain AKC recognition, so that we can exhibit as our own unique breed at AKC shows under the standard that best fits our exquisite Biewer Terrier.

*Text and images used with permission from Biewer Terrier Club of America  (http://www.biewer-btca.com/biewerhistory.html)