For an English version, please move your mouse over each word of the menu. So, a new submenu will appear below.
Standard CBKC (Confederação Brasileira de Cinofilia) 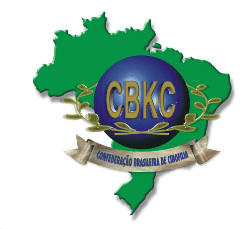 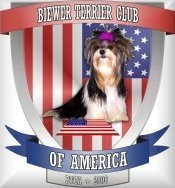 This is the only revised standard that has been accepted, revised, and signed by Mrs. Biewer. 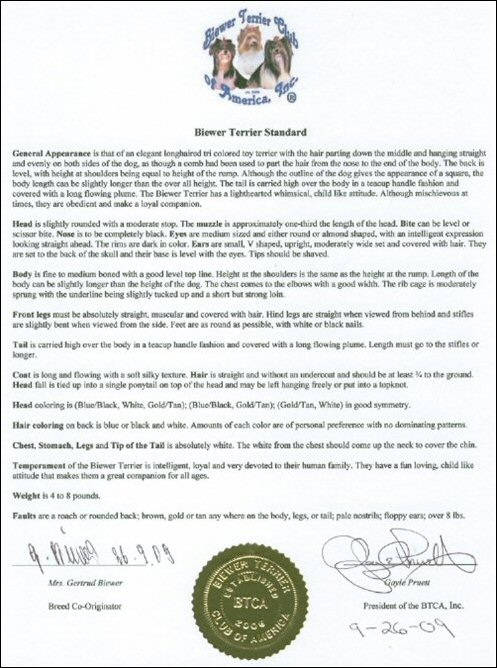 Mrs. Gertrud Biewer signing the Standard in Germany and Mrs. Biewer & Mrs. Gayle Pruett together in the meeting. 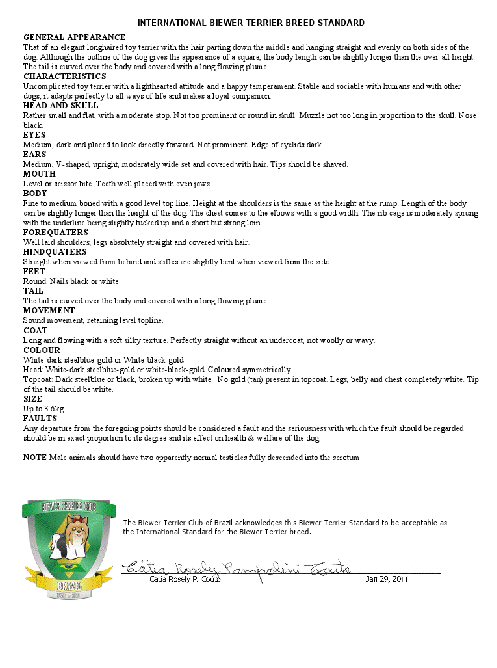 International Biewer Terrier Breed Standard signed by Mrs. Cátia Rosely Pampolini Couto (President of the BTCB) in January, 29 2011, for the BTCA & KUSA. Thank you very much Mrs. Gayle Pruett, and the BTCA for the trust in my person, and looking forward for the recognition of the breed in the world!

General Appearance: is that of an elegant longhaired tri colored toy terrier with the hair parting down the middle and hanging straight and evenly on both sides of the dog, as though a comb had been used to part the hair from the nose to the end of the body. The back is level, with height at shoulders being equal to height of the rump. Although the outline of the dog gives the appearance of a square, the body length can be slightly longer than the over all height. The tail is carried high over the body in a teacup handle fashion and covered with a long flowing plume. The Biewer Terrier has a lighthearted whimsical, child like attitude. Although mischievous at times, they are obedient and make a loyal companion.

Head: is slightly rounded with a moderate stop. The muzzle is approximately one-third the length of the head. Bite can be level or scissor bite. Nose is to be completely black. Eyes are medium sized and either round or almond shaped, with an intelligent expression looking straight ahead. The rims are dark in color. Ears are small, V shaped, upright, moderately wide set and covered with hair. They are set to the back of the skull and their base is level with the eyes. Tips should be shaved.

Body: is fine to medium boned with a good level top line. Height at the shoulders is the same as the height at the rump. Length of the body can be slightly longer than the height of the dog. The chest comes to the elbows with a good width. The rib cage is moderately sprung with the underline being slightly tucked up and a short but strong loin.

Front legs: must be absolutely straight, muscular and covered with hair. Hind legs are straight when viewed from behind and stifles are slightly bent when viewed from the side. Feet are as round as possible, with white or black nails.

Tail: is carried high over the body in a teacup handle fashion and covered with a long flowing plume. Length must go to the stifles or longer.

Coat: is long and flowing with a soft silky texture. Hair is straight and without an undercoat and should be at least ¾ to the ground. Head fall is tied up into a single ponytail on top of the head and may be left hanging freely or put into a topknot.

Hair coloring: on back is blue or black and white. Amounts of each color are of personal preference with no dominating patterns.

Chest, Stomach, Legs and Tip of the Tail: is absolutely white. The white from the chest should come up the neck to cover the chin.

Temperament of the Biewer Terrier: is intelligent, loyal and very devoted to their human family. They have a fun loving, child like attitude that makes them a great companion for all ages.

Faults: are a roach or rounded back; brown, gold or tan any where on the body, legs, or tail; pale nostrils; floppy ears; over 8 lbs.

*Text and images used with permission from Biewer Terrier Club of America   (http://www.biewer-btca.com/breedstandard.html)